The platform can execute more than 1,000,000 transactions per second at a execution speed of 0.01 seconds. Because transaction fees are minimal, high-volume applications are possible in a way that no other available blockchain (today) can match.

What problems does Credits solve?

These problems are a huge obstacle to the development of Bitcoin and Ethereum in a number of industries. Ethereum is currently being updated in order retain the leading position of blockchain network ranking. But until that time, other players may appear that will seriously compete with Ethereum. The CREDITS Blockchain aims to fill that void by implementing a new algorithm for reaching consensus. They reach consensus by combining PoW (Proof of Work) and Pos (Proof of Stake), using a modified FA consensus algorithm.

CREDITS project advantage is the independence from mining (there is none) and the DPoS (Delegated Proof-of-Stake) principle based operation. These modifications lead to the following technical characteristics of the CREDITS platform:

What are CREDITS characteristics?

No Mining: The project advantage is the independence from mining (there is none) and the DPoS (Delegated Proof-of-Stake) principle based operation. Transactions are transferred centralized for processing to the main node, where they are processed and written to the registry. This reduces transaction processing time.

Higher throughput: Because they do not rely on mining for consensus CREDITS is able to process transactions up to up to 1 million T/Sec with a blockinterval of 3 sec.

Autonomous Smart Contracts: Ethereum has limited smart contract facilities and cannot implement everything a developer may want to implement. For example, you cannot adjust regular debit payments or a fixed debiting date. The CREDITS platform is a full-scale and autonomous system that is able to perform all of these operations.

CREDITS comparison vs Bitcoin and Ethereum: 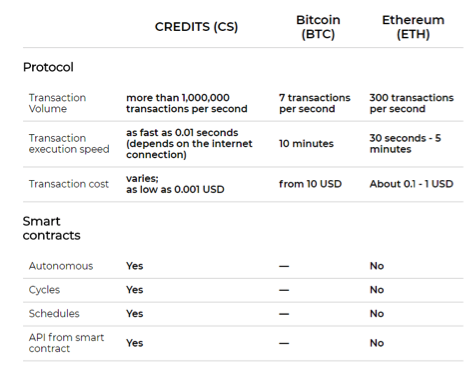 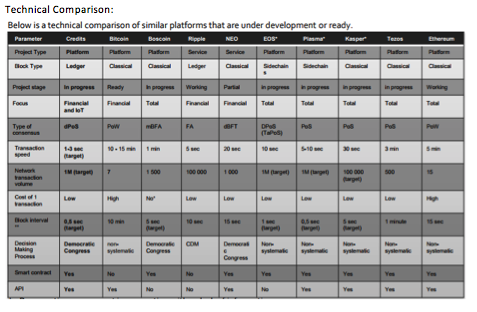 The CREDITS concept was developed in 2016 and received first investments by the end of that year. The CREDITS team started developing the CREDITS platform in January, 2017. CREDITS will release their Alpha release within a few days from now (10-12-2018).   We will now only focus on their future milestones:

CREDITS is currently a team of 38 people, with extensive expierence in their respective fields, we will now only name the 3 most important ones:

The team is supported by an advisory board with extensive experience in fintech and startups.

How are CREDITS tokens used?

The system uses the CREDITS currency, which serves:

There are some key technology risks that are basicly the same for all blockchain related projects, here are the most important ones:

We think that CREDITS will be a good investment. If they manage to go live with their mainnet before the competition does, they will have a huge potential. Their product addresses some of the most pressing issues plaguing blockchains today. Their smart contract code is more advanced than that of Ethereum and they have the benefit that they where able to design their blockchain from scratch.

Our Rating based on our pointing system in excel was as follows:

CREDITS gets a rating of 89%

We are investing in this ICO!

This is not investing advice, we merely show you in what ICO we are investing. As always do your own research!