We love the concept of a precise and decentralized GPS system which can be used for consumer purposes, however there are a lot of uncertainties concerning the implementation of their blockchain and the launch of their LEO satellites. It will take tremendous efforts and money to realize a project as big as this one.

Location data is used by individuals, companies, industries and governments across the globe on a daily basis. From mapping, self-driving vehicles, trade and parcel delivery services, location data has many use cases in today’s world.

However, traditional GPS location data service providers do not always prove to be reliable and often do not offer precise location data. The European Union is building the Galileo GPS satellite system just because of this inaccuracy. This inaccuracy is not a design flaw or a misalignment between satellites, it is due to design. The US military uses GPS for their GPS guided missiles and they do not want other nations to be able to use their technology for the same reasons. This makes GPS not really suitable for delivery systems that need to be reliable and accurate.

This is where XY excels at, they are developing a reliable, verifiable and efficient data location system based on blockchain technology. You can think of it like a crypto-location ecosystem which utilizes the decentralized features of blockchain technology to deliver unrivalled location data services. This ecosystem is trustless and runs on distributed ledgers.

Created in 2012, XYO is an IoT hardware manufacturer and location data service provider which boasts of one of the largest networks of GPS and Bluetooth beacons in the world. As of writing, XYO has over a million beacons spread across the world.

The XYO blockchain network comprises four components: Sentinels, Bridges, Archivists and Diviners. All these components work in concert to verify location data. It allows developers to build decentralized apps on top of the network to interact with the real world.

Like most cryptocurrency projects, XYO has a cryptocurrency token named “XYO” which is the fuel for the network. Crypto- location miners, in this case, verifiers are paid using the XYO tokens.

What problems does XYO aim to solve?

Traditional GPS technology has not been reliable and precise. XYO seeks to revolutionize the location-data industry by bringing decentralized components that verify data to ensure certainty.

How does XYO aim to tackle these issues?

The XYO network itself utilizes the Proof of Origin algorithm which basically means that thousands of Sentinels in the network can verify location data while still maintaining high levels of confidence in the heuristics.

How does the XYO blockchain work?

The beauty of the XYO network is how it’s designed to integrate easily with leading blockchain platforms.

Given the fact that XYO delivers certain, reliable and verifiable location-data, the project has multiple user cases as shown below

The XYO project has achieved some milestones since inception. Here’s a sneak preview of the project’s roadmap: 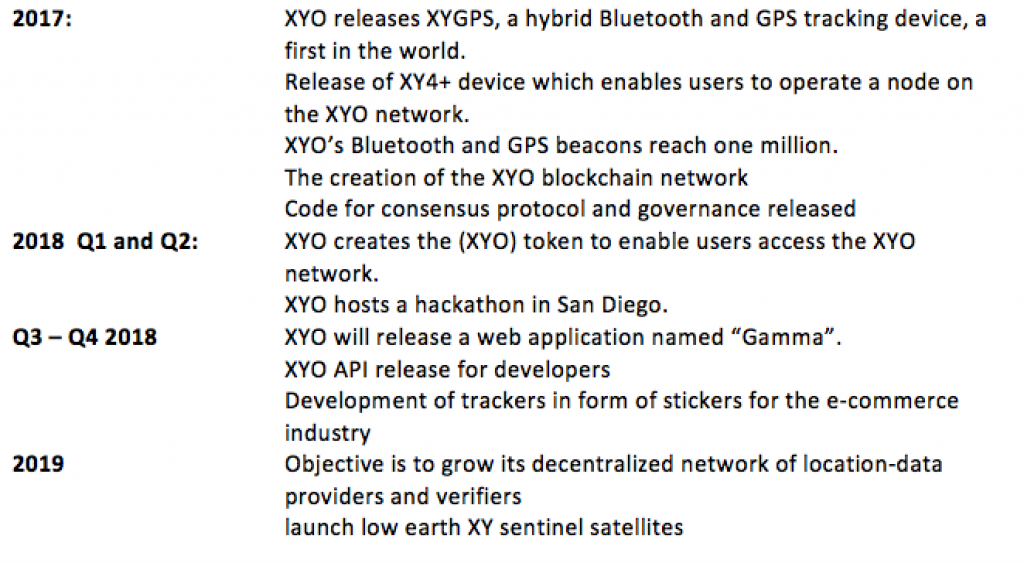 The XYO project is headed by a diverse mix of experts with backgrounds in software development, entrepreneurship, and marketing. We will just look at a cross section of the core team.

Arie Trouw – CEO
Arie is the founder and CEO of XYO, his experience in software development date as far back as writing computer code for Atari. He worked for both for Apple and archrival Microsoft

Scott Scheper – Co founder and head of marketing at XY
Scott has a background in digital advertising and technology startups. In 2013, he launched Greenlamp, a programmatic advertising agency focusing on direct-response media buying. In the first year of its operation, Greenlamp managed to generate over $12M in revenue

Markus Levin – Co founder and Head of Operations
Markus has over 15 years of experience in managing and growing companies. Besides being a blockchain enthusiast he makes sure to utilize the best qualities out of his team.

Token distribution:
100 Billion Tokens pre-mined (all unsold tokens will be burned)
39.4% to be sold in ICO
6.6%-given to the team to ensure success of the project (based on a vesting schedule)
3.5%-distributed to the company
3.3% -to advisors (one year vesting)
3.3% -to enterprise partnerships
3.1% for promotion
1.6% sold at presale

We love the concept of a precise and decentralized GPS system which can be used for consumer purposes, however there are a lot of uncertainties concerning the implementation of their blockchain and the launch of their LEO satellites. It will take tremendous efforts and money to realize a project as big as this one.

Our Rating based on our ICO pointing system is as follows:
XYO gets a rating of 74 %